This year, sunset on Monday, September 6, marked the beginning of Rosh Hashanah, a Holy Day in the Jewish calendar that is commonly called the Jewish New Year.

It is a two-day holiday, ending at nightfall on Wednesday, September 8, that marks the beginning of the 10 Days of Awe, a time when Jews reflect, reset, and reevaluate their lives approaching Yom Kippur, the most sacred Day of Atonement.

There are several traditional observances; all are filled with rich symbolism. The central observance is the blowing of the shofar, (or ram’s horn), on both mornings of the holiday, (except on Shabbat), which is normally done in synagogue as part of the day’s services, but may be done elsewhere for those who cannot attend.

Candles are lit in the evenings to usher in the holiday with light and warmth.  Since Jewish holidays begin with the setting sun, a lit candle creates a sacred space, a glimmer in a dark night.

There are other traditions, many similar to Shabbat observances, but it is the feasting that is most relevant to this column.

Food symbolizes wishes for a sweet year, blessings, and abundance and so meals focus on sweet foods.

One of the most popular and well-known customs, a meal, often begins with an apple dipped in honey and making a blessing over the apple, and adding, “May it be Your will to renew us for a good and sweet year.”  Apples represent not only sweetness, but also Paradise, an auspicious sign with which to begin the New Year.  Its pleasing appearance, fragrance, and taste are symbols of hope that the New Year will bring joy and success in all areas of life.

I used the last of the exquisite golden Locust Honey from Blue Ridge Apiaries in the mountains of North Carolina and a beautiful Fuji apple.

Fish dishes are traditionally a part of Rosh Hashanah.  According to tradition, having fish on the table is an omen for blessings to come. When the fish is served, observant Jews recite a prayer expressing the wish, “that we be fruitful and multiply like fish.”

From an Israeli newspaper, the recipe comes from the Israeli restaurant, Pescado’s chef, Yehi Zino.  I adapted it by using jarred peppers since I didn’t have fresh red chilis and adding olives and leeks which are associated with the Exodus from Egypt and made it more accessible to the home cook.

A favorite, and some would even say a necessity, on many Jewish tables is Kugel.  It is a near sacred tradition for Shabbat and Rosh Hashanah.  Recipes are passed through generations and, while there are variations, most families have a tried and true version that never varies.  Kugels can be based on noodles or potatoes, and this one, from my friend, Crystal Blackmon of Empty Nest Studio and Gallery in Frisco, is an Apple Noodle Kugel for Rosh Hashanah.

Crystal notes: “Since apples are used for the holiday, I slice around 7 and saute them in butter or margarine with brown sugar, cinnamon, and nutmeg to taste. I then spread the mixture of top of the kugel and press down with a spoon, allowing some liquid to integrate through the apples before baking.”

A bright salad adds a refreshing touch and introduces one of the most closely associated of the holiday foods.  Pomegranates, with its abundant seeds, symbolize hopes we will come before God with abundant merits.

Pomegranates are said to have 613 seeds, corresponding to the 613 mitzvot, Jewish rules or commandments.  The mitzvot covers many aspects of Jewish life.  Jews agreed to follow these rules when they were given to Moses as part of the covenant at Mount Sinai.  Following these laws is a core part of Jewish identity.

Unfortunately, I was unable to find a pomegranate, so I substituted roast beet slices for color.

The Hebrew word for beet is “selek,” similar to “remove.”  It is eaten to express the hope that our enemies will depart.

Spinach is traditionally served as it symbolizes renewal.  Some maintain that this leafy green is the original symbolic food for Rosh Hashanah.

It is customary to finish the meal with honey cake, or apple and honey cake, but it feels too heavy for me after our feast.  I chose a Middle Eastern confection that is always available in Jewish delis in the U.S. and in the markets in Israeli cities where halvah merchants pile their tables high with huge slabs of this delicacy in innumerable variations.  It is rich, sweet, and sticky, but it can be stored in the fridge for quite some time so you can nibble on it a little at a time.

1 cup honey (My favorite Tupelo Honey from Lanier’s in Wewahitchka, Florida)
3/4 cup smooth tahini
1/2 cup slivered almonds
2 teaspoons rose water – you can replace with 1 teaspoon vanilla extract or 1/4 teaspoon almond extract but if you can get it, rose water gives it a genuine Middle Eastern taste.

While these are special recipes for the Jewish Holy Day of Rosh Hashanah, they can certainly be enjoyed by everyone!  And it won’t hurt to think about the symbolism behind them! 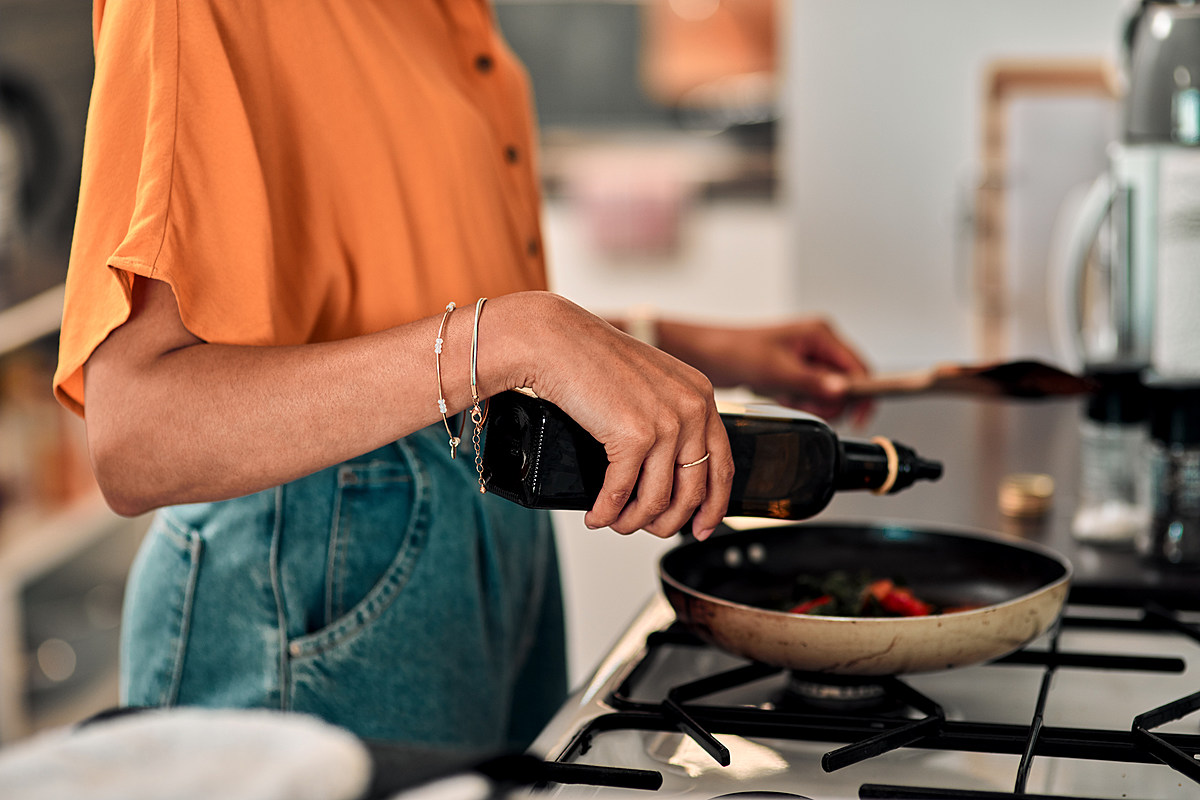 You cook healthier meals, generally plant-primarily based, but when it will come time to pick out the oil to include...